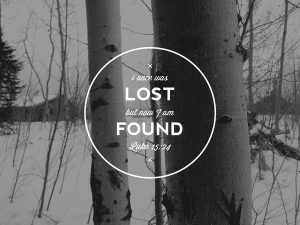 We read two sections from Jeremiah this morning and, the section in-between that is missed out, gives imagery to the Babylonian invasion.  In an interesting twist the blame for the invasion is placed with the invaded rather than the invaders.  This is real social comment where it is understood that bad national policy makes invasion a real possibility.  The second part of this morning’s reading is a lament over the devastation caused by the invasion. and Maurice Andrew points especially to the line in the second half of verse 25.

‘And all the birds of the air had fled.’ Which reminded him of a character created by the New Zealand author Owen Marshall who was ‘so tough that the birds stop singing as he passes’.  [1]

The parable of the prodigal son actually belongs with today’s reading to make three parables of the lost.

The lost sheep, the lost coin and the lost sons, one who goes away and returns and the other who defies his father by not coming to his father’s celebration.

The importance of remembering that third story as we read the other two is that the younger son goes away and comes back but the eldest, although he stays home, defies his father and the father leaves the party to plead with him.

So, in all three stories the lost is searched for by its owner, the lost sheep, the lost coin and the lost, through defiance, eldest son.

In that way the three parables inform each other and relate to the opening lines of the chapter which is where we begin.

‘The joy of finding is so abundant that it cannot be contained; one person cannot adequately celebrate it; there must be a party to which others are invited.  Jesus invites even his critics to join him, and all heaven, in celebrating the lost’. [2]

The opening paragraph of this morning’s gospel reading gives the reason for the following three parables of the lost.

Now all the tax collectors and sinners were coming near to listen to him.  And the Pharisees and the scribes were grumbling and saying, ‘This fellow welcomes sinners and eats with them’. (Luke 15:2)

Dr Bill Loader suggests that the controversy is not over whether Jesus called sinners to repent, because if that was all Jesus was doing, along with preaching in an area that was understood to be frequented by sinners, then he would have been the hero of those Pharisees and scribes.  The problem the Pharisees had was that Jesus had already demonstrated his willingness to value all people regardless of how they were labelled as persons.  Jesus was prepared to treat all people as people of worth before there was any repentance from whatever ‘sin’ it was perceived they might have committed.  That total acceptance by Jesus was an expression of love, unconditional love.

It was an acceptance that was extremely challenging, because Jesus was suggesting that these so-called sinners should be valued as people who would also be part of his future vision.  He was not including them in his ‘realm of God’ vision so that they could be ‘converted,’ or made so they could be valued and worthy of love.  Jesus accepted them because they were already valued and loved.  The distinction says Loader is subtle but significant.

Loader then gives us a metaphor of his own by suggesting that one approach focuses on the fruit; the other, on the tree.  ‘There is all the difference in the world between telling the tree it must produce good fruit and tending to its real needs which make such fruit bearing possible’.[3]

When we moved to our present home, I took my plastic compost bins with me and used them as the base of two raised vegetable beds and eventually replaced the plastic bins with two wooden bins made from old pallets.  I never replant the garden without first spreading compost and I only use the green bin for out-of-control weeds with seeds on them.  When we bought the place, it had a magnificent ornamental garden but grew nothing we could eat.  I probably planted too many trees but after last summer the freezer was so full of fruit and veg that I had no room for fish, which was a bit sad.

So, I understand Loader’s metaphor. However, the real challenge he gives us is how do we respond.  Are we the Pharisees and scribes who want confession before redemption or are we the followers of Jesus who accept all people into our companionship?

Are we the Jesus people who will risk inclusion in the realistic expectation that love and kindness will transform both the sinner and the sanctimonious?

There are plenty of examples where that is not the case and our communities look to be much nearer the scribes and the Pharisees than following the Jesus model.

Our penal system refuses to parole the most model of prisoners if they profess their innocence and refuse to admit guilt.  Yet our appeal courts regularly throw up high profile instances where people have been wrongfully convicted.

We are rightly shocked by children committing ram raids.  But arresting them and incarcerating them with more experienced villains somehow seems counterproductive.

We get even more upset that young people may be getting a benefit rather than working.  Unemployed people are regularly labelled as sinners despite the fact for all sorts of reasons some people are unemployable.    It is a fair guess that a large portion of jobs advertised belonged to highly employable people who moved to another job because it looked a better prospect.  That movement creates vacancies that are advertised but will be filled by highly employable people who are also moving from one job to another.  So, the competition from employed people moving shuts out the unemployed people who become more unemployable the longer they fail to secure a job.

Furthermore, we don’t stop to think about how reticent employers can be about taking on a young person with no experience.  I don’t blame the employers because I have been that employer on a number of occasions.

I met up with a man I didn’t employ at the Professional Photographers Awards Dinner in Nelson.  He had just won an award for a fabulous photograph, one of many in a distinguished career and I said aren’t you glad I didn’t give you the job as my receptionist.   I sent him to the new photography course at the Wellington Polytec, the only one at the time, and he has had a fantastic career.  He was really applying for my job which was not on offer.  It was the best employment decision I ever made.

I got my first job by accident.  I told a panel beater that I needed him to finish fixing my car because I was cold calling for jobs.  He knew my Dad had been a photographer and recommended me to a friend who was looking for a young lad to work in his photography business.  My eldest son got a job as a history teacher because he went to America with a New Zealand under 23 rowing eight. His brother got his first teaching job because the principal who came looking for geography teachers at teacher’s college taught him maths at high school.  To be fair he had previously been a painter, worked in a British kid’s holiday camp, London pubs, been a chair lift operator and landscape gardener in Banff as well as worrying his father by the amount of time he spent at the beach while he was unemployed.

As Kermit the frog sings ‘It’s not easy being green.’  So we shouldn’t make assumptions or dismiss the place luck plays in our own story.  Above all, love should always direct us to look for the positive in people and open us to offer hope rather than judgement.

I spoke to a woman recently who said that only one of her children had dropped out of school early but eventually came back to study and is now a doctor.  The proud mum then added ‘The little tyke.’

Even though we are told that love leads to new beginnings the church has excluded people from membership for hundreds of years unless they confessed and renounced certain beliefs and practices.  A traditional church building was designed so the miserable sinner could enter by the narrow door and find a place in the long rows of pews. They would pick a place sufficiently far back so not to contaminate the sanctuary at the front.  It was not until after the general confession that the sinner could humbly, with head bowed, come to the altar rail and receive communion. One instance of Grace, in their ‘sinful’ poverty driven lives.

The church of today still plays with in-groups and out groups that strengthen the belonging of those in, at the expense of those out.

I have previously quoted the bumper sticker ‘The Christian Right is Neither’ but another source of wisdom is the notice board of the Gosford Anglican Church.  One posting that is relevant to our Gospel reading is. ‘True Freedom is the Freedom Not To Discriminate.’

I have no idea what the vicar had to say about that but, as we tentatively look towards future ministry, we become very nervous about preserving the freedom we have had without considering the possibility of where the spirit might lead us in the future.  We may well need the courage to seek the freedom not to discriminate.  The freedom to be open to the future God may be calling us to.

The Pharisees in our reading represent good people in all ages and circumstances who separate themselves People who seek to define their purity by excluding those they perceive as lacking purity.

People who certainly approve of sinners being called to repentance in line with John the Baptist’s message.

But although Jesus’ ministry began with John’s baptism of repentance Jesus changed John’s message into a baptism of belonging and acceptance.

There are certainly elements of judgement in Jeremiah’s poem we read this morning, but the overall theme is lament.

God crying over the fate of people who have brought disaster on themselves.  That is certainly an ongoing theme in the history of humanity as unjust or foolish actions bring calamity that leads to further calamity.

The Jesus’ way through such ongoing calamity is not to call people to some uniform and impossible purity but to recognise the God who laments such foolishness and seeks out the lost.

Luke introduces Jesus’ three parables of the lost by setting the scene and then relates the three parables of the lost, each of which concludes with a celebration.  The God we image in Jesus Christ not only seeks out the lost, but also celebrates their return.  The celebration is an inclusion of both the lost and those who seek.  A celebration in a community of loving inclusion that calls people to transform their lives and so transform the lives of others.

The sheer creative magnificence of Jesus’ vision of a realm of God is that when humanity judges itself, as our examples demonstrate, people struggle to make accurate or acceptable judgements.

Our two parables this morning and our memory of the third reminds us that God calls us to celebrate the return of the lost, not to judge who is lost and who is not.

We are called to celebrate together in an inclusive loving community and allow our lives to be transformed by the company of others who are themselves transforming.