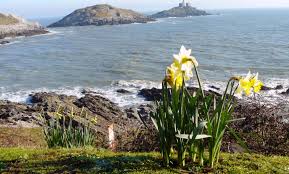 We’ve just moved into the season of Creation. It’s a newish season of the church year, but it has rapidly become an urgently important season. It’s intended to be a time when we deliberately make connections between our interpretation of Scripture and our awareness of “creation.” This isn’t something we do easily because most of us have inherited traditional ways of reading and interpreting scripture through the lens of our humanity. This is, we focus on the personal – (what does this passage say to me) and also social justice. The Season of Creation challenges us to reconfigure our thought patterns and to ask: “How does this passage affect my attitude towards the Earth and all its inhabitants?”

The season began on September 1 – Creation Day, and today is Ocean Sunday. But I needed to start at the beginning because of those amazing images coming to us from the James Webb telescope. We are getting images that have travelled through billions of years – thousands of millions of years. From before the time when our planet first came together. It’s hard – no it’s impossible to comprehend the time scale. My brain can’t cope with more than a few millennia. I know that life began on this planet hundreds of thousands of years ago, but I can’t easily grasp these timespans, let alone the cosmic ones!

We live in a complex, wonderful cosmos, and what we need reminding of is that when we use the word ‘God” in our worship, we are talking of something complex and wonderful and undefinable.  The Creator is beyond images, beyond even imagining.

The images from the Webb telescope speak directly to the words from our reading in Genesis. The wonder of the Big Band, the swirling galaxies beyond our counting, and the billions of years (and whatever was a ‘year’ before there was our planet, our suns and our galaxy) – the wonder of all this is not all there is. For those of us who say, “We believe in God.”

We could have used Ps 8 this morning. “When I look at your heavens, the work of your fingers, the moon and stars that you have established…….” (Ps 8:3) Those new photos produce wonder at the divine handiwork!

The author of Genesis 1 wrote of the sun created by God to keep order on earth, to sustain the seasons, to shed light and govern times. In our time we have come to understand a little more just how vital it is for Earth to have a balanced flow of heat and light from the sun, and so we are called to respect the sun, to protect the planet and to acknowledge that the energy from the sun is a clean, green source. And knowing this, our mission includes making our buildings (including our church buildings), our communities, our atmosphere and our lives green. We depend on God for life and green.

And then we come to Job. This story is part of the Wisdom literature, and those writings are enigmatic and challenging. Everything went wrong for Job and he thought – no, he knew – that it shouldn’t have gone wrong. He had followed all the rules. All of us can feel for Job at times. We know we haven’t been in the wrong but bad things still happen in our lives. If God is Creator, then obviously it must be God’s fault. God’s challenge to Job is to look beyond his own personal crisis and consider the “design” implanted in the universe. Consider all the components of the cosmos known to him: the Earth, the oceans, the constellations, the lightning, the deeps, the clouds, and more. Did Job know how any of them came to be. How much do we know? We certainly have the advantage of knowing a little more than Job knew, but one of the challenges – or the disappointments perhaps, of finding out some new facts about our patch of the cosmos only opens the way for more questions. We have a choice of course. We can simply close the book on it all and say: we don’t need to know any more. It’s all there in the scriptures, and we’ll leave it there. We’ll build a wall around the words and separate them out from the rest of life.

That’s not my choice, and I very much doubt it’s yours. There will always be more to learn, and more pathways to understand. Job was challenged to be one of the ‘wise’, the scientists of his day who sought to grasp the inner way of things, the wisdom implanted in nature. To live according to that wisdom is to live in harmony both with nature and with God. Many years later, the Apostle Paul or one of his followers added the interpretation that the ultimate expression for humanity of God’s wisdom is found in the cosmic Christ. This is the declaration in Ephesians 1 that Christ not only reveals God’s presence, but gathers together all the components of the cosmos into himself.

At the end of the Book of Job, God says Job spoke the truth (42.8).  A tour of the cosmos ends in a realisation that in the grand design of things, some creatures suffer. The epitome of that innocent suffering is Jesus on the cross.  Sad to say, much of creation suffers, including the ocean, because of human greed rather than natural causes.  Christ also suffers when creation suffers because of human crimes against creation.

Now – the Gospels. On Thursday I got my monthly Tui Motu magazine and there’s an article by Neil Darragh that I decided I must share with you. We are accustomed to reading the Gospels as a set of instructions about how to treat each other. Remember the commandment of love that is so central to New Testament teaching. When a lawyer asks Jesus: “What must I do to inherit eternal life?”, Jesus’ answer is “What do you read in the Law?”  The lawyer’s answer, approved by Jesus, is essentially, “Love God and love your neighbour.” The lawyer (after his kind) wants more details, and so we get two stories: the parable of the good Samaritan, and the interaction at a dinner table between Jesus and his friends Martha and Mary. The first story demonstrates that the love commandment is fulfilled by an act of compassion. Action rather than feeling. The second story is more complex. We have Martha essentially doing the same as the Samaritan – looking after the needs of the people. Love in action again. Mary demonstrates the complementary side of loving action: listening, meditation and reflection. Both factors are needed to know what a loving action is.

That’s the first level of interpretation. Both stories have a shock component that takes us deeper. The role of the Samaritan confronts the racism that was inherent in Jesus’ Jewish culture. (And, we need to remember, is present in our culture). The law of love will always challenge embedded attitudes at odds with God’s realm. The actors in the second story are women – apart from Jesus of course. Jesus taking the side of Mary in the altercation between the sisters strikes most of us as unfair. This is the shock component of the second story. The key point here is not so much Mary’s apparent idleness, but Martha’s attempt to prevent Mary from playing a different cultural role. Martha is doing the culturally approved women’s work. Mary is playing the role of disciple.

Both these levels of interpretation were understood by the early Christians. They baptised people of any ethnicity and they baptised women.

But there’s a third level in these stories which is more obvious to us, and that is the confrontation that we professed to believe in a Creator but were vandalising God’s creation. The parable of the Samaritan is a response to violence, and we know that human beings are not the only victims of human violence. Think of the non-human species and processes that have fallen victim to senseless human violence and prejudice. The story of Mary and Martha focusses on the need to pay attention to the divine presence in then face of a human person, and it’s a relatively small step from here to learn to pay attention to the voice of God in every created being.

I should say something about the reading from Luke that we did hear this morning. It’s the one set down in the Lectionary for Ocean Sunday. And, strangely enough if we dig a little deeper into the story we can find something of Neil Darragh’s ‘third level’. And something of the mysteries of the wisdom tradition as well. Simon Peter was a fisherman. Like most ardent fishermen, he knew the ‘way’ of the fish. He knew their feeding habits and their usual habitats. Jesus challenged him to throw his nets into the deeper water – the realm of mystery. Just like Job had been challenged to explore beneath the seas. The deep is the unknown, and it’s precisely here that the men find a great catch.

Jesus is challenging his new disciples to move beyond their known spaces – their comfort zones. First they will leave the fish behind and explore the human world and understand Jesus’ message of new life.  And later they will explore an even deeper realm. They will bring people to know the cosmic Christ. The risen one who is in all creation. Are we ready to go fishing in the cosmic deep?