We celebrated this milestone

With a time of fellowship, 4-6pm on Saturday, 2nd  June 2018
And a service of Worship and Communion, on
Sunday 3rd June 2018, at 9.30a.m
followed by Lunch and cutting the birthday cake 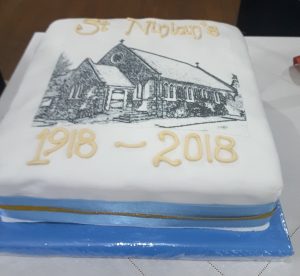 We would value any further information about the donors of these items, or the people mentioned here, who have contributed to the parish of St Ninians in any way.

The small plaque under the window in the church porch indicates that in 1958 the porch was furnished by Mrs R.S. Leslie as a memorial to Raymond Leslie who was killed in action in 1945 and Richard Sheridan Leslie who died in 1957.

– the foundation stone on the Church, laid by Rev George Lindsay 25 September 1926

– the plaque commemorating the opening and dedication of the lounge building by DrJ.D. Salmond, Youth Director, on 18 August 1946

– the Memorial Tennis Courts “In memory of the men from this church who made the supreme sacrifice in the war 1939— 1945”.

There are plaques which represent a circular piece of needlework done by Sister Elizabeth Allen (Deaconess) and a painting by Jean Dick.

An article in the December 2017 magazine gives some information from that time.

From the Fifty Year Jubilee Magazine:

Although St Ninian’s is celebrating 50 years as a parish, it goes back quite a few years before 1918. (A Sunday School was stared at Wharenui School in August, 1907) .  On August 15th, 1913, a meeting under the auspices of St Andrew’s Church, was held in the Wharenui School when a committee was appointed to arrange for the collection of funds for building a wooden church (now the present hall) on a site in Puriri St, Riccarton, which had been donated by the Deans family. The erection of the building commenced almost at once and the church was opened on February 22nd 1914. The contractor for the building was Mr Charles Taylor, an elder of St Andrew’s, and the father of Mrs Eric Walker.

Meantime, services were held in the Wharenui School by a divinity student, Mr J.V. Jacobson, who was succeeded by the Rev A.F Burchell, whose district included Spreydon. He was followed by Mr John Newlands, Mr W.J.Harvey . Steps were then taken to obtain an ordained minister, and later in 1917 Rev N.O White (who had acted as an assistant minister at St Andrews for a short time) was appointed to the Riccarton Church.

Rev White did such excellent work in the congregation that it felt justified in asking the Christchurch Presbytery to raise its status to a fully sanctioned charge. Presbytery agreed, and in June , 1918, appointed the Rev D.D. Roger. Of Papanui, as Moderator, and appointed an interim session. A call signed by 89 members and 21 adherents, was presented to  Rev N.O.White who was inducted as the first minister of the Riccarton Church on July 16th, 1918. Presbytery expressed its pleasure in sanctioning the move, as Riccarton Church was the first to reach full stature for more than 20 years.

It wasn’t until the stone church was opened in 1926 that the  accepted a suggestion to name the parish St Ninian’s since it was the first stone Presbyterian church in Canterbury. 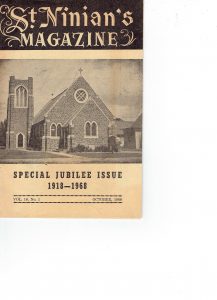